How Temporary adjustment of Theodolite is done? 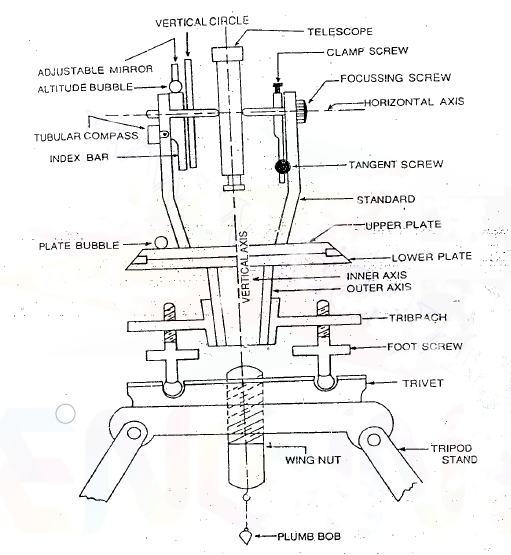 Setting Theodolite over the Station

The legs of the tripod stand are fixed firmly in the ground and kept well apart. Two legs are pressed in the ground and the third leg is adjusted up and down or in and out so that bubble is approximately at the center of its run.

Care should be taken that the plumb bob remains approximately over the station.

Focusing of the eyepiece is done so that the cross-hair can be seen clearly. The telescope is directed towards the sky or a white piece of paper is kept in front of the telescope. The eyepiece is rotated till the crosshairs appear distinct and sharp.

Parallex can be checked by moving the eye up and down if there is no relative movement between image and crosshairs then focussing is perfect.

The vernier A is set to 0 degrees and vernier B at 180 degrees. To do this lower clamp is tightened and the upper clamp is loosened. The theodolite is rotated till it comes approximately near to 0 degrees.

Now upper clamp is tightened and the upper tangent screw is turned until the vernier A coincides exactly with 0 degrees.

Honeycomb in Concrete, reasons, and repair.

Reach out to us

Are you interested in Construction Domain? We are too!